Hugh Norreys’s quiet life is interrupted when a foreign woman insists on seeing him. She ignores his dismay and manages to persuade him to come with her.

Lying on his deathbed, John Gabriel is a shadow to his own self. But the past has cast a long shadow over him and Norreys since their last encounter in Zagrade. Since Norreys saw him and Isabella Charteris together.

When the book was published in January 1948, London hardly recovered from the wounds of the War. The cold winds of harsh winter were still blowing hard, her inhabitants impoverished. Meanwhile, Clement Attle’s government had set the nationalisation and the welfare state  in motion and officiated the formation of the National Health Service (NHS) – Early Years in the summNotes On Peril At End Houseer.

Upon this backdrop Westmacott plotted a tempestuous period in the weeks leading to the polling day in a Conservative stronghold. In St. Loo, no less.

Arthur Hastings in Peril At End House describes the imaginary setting at the beginning of the novel as ‘no seaside town in the south of England is, I think, as attractive as St. Loo. It is well named the Queen of Watering Places and reminds one forcibly of the Riviera…’ However, in Westmacott’s world there are no dead bodies. Instead Hugh Norreys the narrator commences with his recollections seeing a dying man; a man of whom he’s banished from memory.

Little Gidding church in Little Gidding, Huntingdonshire, UK. T.S. Eliot visited in 1936 and named the last of his Four Quartets after the village. Image by Simon Kershaw.

We die with the dying;

See, they depart, and we go with them.

We are born with the dead; See, they return, and bring us  with them.

A people without history

Is not redeemed from time; for history is a pattern

Of timeless moments. So while the light fails

On a winter’s afternoon, in a secluded chapel

History is now and England.

Westmacott based her title on a line in  Eliot’s concluding part of his The Four Quartets. The church in which the poet sat in reflection after a long walk is a home of an Anglican community established by Nicholas Ferrar in 17th century. The religious history of it might have inspired Eliot  and yet it was the comfort the poem had offered that might have given Westmacott a suitable plot.

Thus ‘we die with the dying…’ depicts a scene in which Gabriel tells Norreys as to what happened in Zagrade. The urgency of a closure before a soul leaves the world is the highlight and the subsequent lines ‘ we are born with the dead….’  are translated in  Norreys’ journey to ponder over an eventful summer in a Cornish town.

Smokes were still palpable in English towns and cities when Little Gidding was printed in 1942; desperation and demise were palpable, if not compelling in the aftermath of Luftwaffe bombings. Westmacott understood this very well;  the droning sounds of the bombers and their dull thudding noises before hitting the ground had remained in her. So had Eliot. So had their generation.

Westmacott’s take on the poem sees Norreys lives to tell the paths he, Gabriel and Isabella have trodden.

‘We all start out as the central figure of our own story. Later we wonder, doubt, get confused. So it has been with me. First it was my story. Then I thought it was Jennifer and I together – Romeo and Juliet, Tristan and Iseult. And then, in my darkness and disillusionment, Isabella sailed across my vision like the moon on a dark night. She became the central theme of the embroidery, and I – I was the cross-stitch background – no more. No more, but also no less, for without the drab background, the pattern will not stand out.

Now, again, the pattern has shifted. This is not my story, not Isabella’s story. It is the story of John Gabriel.

The story ends here, where I am beginning it. It ends with John Gabriel. But it also begins here.’

It fascinated me as to why such solemn a mood of the poem would befit for a romance.  Initially, this oddity was confusing. The War was over; shouldn’t she moved on?  I put the book aside and reminded myself that I had belonged to a generation that  experienced nothing like the war years. Then I let the story settle in my head and the lines from Little Gidding filled the gap.

It took me longer than I should to discern the beautiful metaphors with vivid imageries of England in four seasons and at the same time to attempt to understand more Eliot’s religious references in them. In particular his  change of tone – a far cry from The Wasteland- about the War and the suffering. It resulted in my learning to living in a moment; that one’s perception of  longevity or brevity is unique. Just as beauty is in the eye of the beholder.

As her nom-de-plume, Agatha Christie took the liberty of flexing her interest in postwar politics. On the one hand the clash of classes is discussed; a man with no title and social standing being contrasted to a young educated girl brought up in a castle.  On the other is political gossips and local rumours and their ruminations that in Norreys’ elaborations represent the shifting mood of a nation still clutching at straws.

The distinct voice in Norreys makes him an active participant that J. Larraby in Unfinished Portrait shares only little. Despite both are disabled people and being positioned as an outsider, Larraby is  reluctant and somewhat unreliable.

What’s more, Norreys isn’t as shy as he would like to think about himself and being confined in a wheelchair can be his biggest advantage. He mingles well with the figures in the traditional community which perceives his presence as an intrusion to their privacy. People come up to him to discuss and to confide. He listens to them.

For Gabriel ‘the fire’ it’s the opposite. He’s ruthless and ambitious; his plain features are compensated by his public speaking skills. His record is also incontestable: a crippled war hero and a recipient of Victoria Cross. But the community is divided when a scandal occurs to the (controversial) Conservative candidate days before the casting of the votes.

“That’s one reason why I’m optimistic about Gabriel,’ he [Captain Carslake] said. “He gets on with women.”

Lady St. Loo, Carslake said was being very good about it…She acknowledged quite frankly that she was old fashioned. But she was whole-heartedly behind whatever the [Conservative] Party thought unnecessarily.

“After all,” said Carslake sadly, “times have changed. We used to have gentlemen in politics. Precious few of them now. I wish this chap was a gentleman, but he isn’t, and there it is. If you can’t have a gentleman, I suppose a hero is the next best thing.”

Which, I [Hugh Norreys] remarked to Teresa after he had left, was practically an epigram.

As for the orphan beauty Isabella, Westmacott deploys her signature of inverse proposition for her inimitable characters. Her demure behaviour defies her intelligent mind and her dreamy countenance belies her matter-of-fact attitude. These traits surprise and enthrals Norreys; just as the sweet Louise Ledner (Murder in Mesopotamia), Lynn Marchmont (Taken at the Flood) and Sophia Leonides (Crooked House) would do. Nevertheless, these women do not always carry a wise head on their shoulders; each of them has taken some poor decisions that bear damning consequences to the people they care.

“You think Isabella is a kind of female Fortinbras?” I [Norreys] asked smiling. Teresa smiled too.

“Not so warlike. But direct of purpose and entirely single-minded. She would never ask herself, ‘why am I like I am? What do I really feel?’ She knows what she feels and she is what she is.” Teresa added softly, “and she will do – what she has to do.”

“You mean she is fatalistic?”

“No. But for her I do not think there are ever alternatives. She will never see two possible courses of action- only one. And she will never think of retracing her steps, she will always go on. There’s no backward way for the Isabellas…’

Last but not least, it would be interesting to find out  whether Eliot read the book and his thoughts about it. What made him choose to compar the yew-tree, an evergreen conifer that is native to England to rose, a non-native plant immortalised in the War of the Roses?  Or would a rose have been simply a symbol of beauty, transience and love whilst the long-lived tree a symbol of death and life?

Did they matter? Even if he didn’t peruse the little known book, I’d say Christie was a fan of his.

Finally, I’m bowing out with a paragraph in Three Things About Elsie:

I honestly believe that every person we meet alters us in some way. From the smallest encounter, to a life-long friendship, we are always changed by those who pass through our lives, even if they only walk with us for a short time 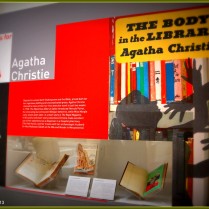 Tintagel: the home of Arthurian Legend and the museum of King Arthur 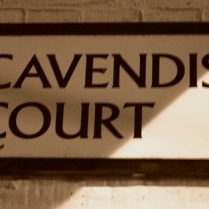 The view from Greenway foot path.

Having mixed bitumen in the paint, Sir Joshua aimed to create a wet effect on the surface as the lights reflected upon it. His experiment caused the darkening throughout the painting – over 200 years already and counting. Now part of the National Trust Collection, it is hung in the Square Dining Room in Petworth House, West Sussex, England.

The Old Swan Hotel, Harrogate, North Yorkshire, England. In December 1926 AC spent eleven days unspotted, having checked into the hotel as ‘Mrs. Neele.’ Too bad. She should’ve transformed herself as Mrs. Blenkinsop